Can Dentists/GDPs like me use the Six Month Smiles system? Absolutely, yes! You can easily do cosmetic ortho using the Six Month Smiles system. Our system is designed specifically for Dentists/GDPs who have little or no orthodontic experience. The vast majority of adult patients are unwilling to undergo traditional orthodontic therapy. The system is the complete solution, providing an orthodontic option that makes it easy for you to treat these patients with clear braces and provide straightening service that they really want.

How can orthodontic treatment be done in only 6 months?

The average case is completed in 6 months. However, the window of time is generally 4-9 months. The two primary reasons for these short treatment times are:

How does the Six Month Smiles system work? After you get trained, the first step is to take records the patient (including impressions, x-rays, and a complete exam). After the records appointment, the case is submitted online and the patient’s impressions are sent to Six Month Smiles (digital or PVS). Once your case is received, our Digital Team will accurately identify and measure each tooth for their correct bracket placement. Once all of the locations have been determined the bracket specialist carefully places all of the brackets so that the desired orthodontic result will be achieved.

Then our lab specialists your custom bonding tray, making bonding the braces to the patient's teeth remarkably easy, efficient and . The bonding trays, appropriate wires, ties, and other needed materials are packaged into our Patient Tray Kit. Once the Patient Tray Kit has been assembled, it is returned to the dentist's office ready to use.

When the patient comes in for their braces-on appointment, the Patient Tray Kit is retrieved and the process begins. After the braces on , the patient is seen every 4 weeks, for a simple adjustment visit. Once the teeth are in the final position, the braces are easily removed and adequate retention is provided. The patient is able to enjoy a smile that looks great and no longer makes them feel self-conscious. Our system is safe, straight-forward and .

Can I treat relapse cases? Yes! Six Month Smiles is perfect for those who have stopped wearing their retainers and have had some movement and would like to get their teeth back into ideal positioning. You’ll likely find many patients in your practice already who would benefit and appreciate this.

Is root resorption a concern with short-term ortho? Is retention different than other forms of orthodontics? No, most orthodontist recommend lifetime retention for ortho patients -  and most Six Month Smiles providers do the same. Lifetime retention means that the patient is using some form of retainer for the rest of their life.
Six Month Smiles recommended protocol is bonded lingual retainer as well as a clear essix-style retainer. Once the bonded retainers are placed, the patient can wear the removeable retainers for 6 months full time, then 6 months every night and then 3-5 nights per week for the rest of their lives.

Retention at the completion of treatment is the same no matter which orthodontic option you choose, whether traditional or short-term. The methods of retention, both fixed and removable, are also similar, regardless of the two forms of orthodontics.

How are the Six Month Smiles brackets and wires unique?

Six Month Smiles brackets and wires have been created to specifically address the unique treatment objectives of short-term orthodontics. Effecting desired tooth movements while reducing undesirable ones utilizing straight wires (no bending!) and shorter treatment times requires proprietary, patented designs. The unique shape memory wires work in conjunction with the pre-positioned brackets to brackets to allow for the desired results to be achieved easily and predictably.

Why use Six Month Smiles Products vs. Other Aligners?

With Six Month Smiles, dentists can choose among clear braces invisible aligners or mixed appliance therapy. No other company gives you three options to move teeth. If you choose Six Month Smiles Clear Braces, we'll utilise clear braces and tooth colored wires to move the teeth. Six Month Smiles Invisible Aligners, on the other hand, use the finest material in the industry to move teeth in a step-by-step fashion.  While it's true that braces can treat a wider range of malocclusions and are able to achieve results faster, braces also give you more control over the treatment and increase patient compliance. And now, there's a third option: Mixed Appliance Therapy. Six Month Smiles is the only company to provide clear aligners for the upper arch and braces on the lower arch. It's the best of both worlds!

Benefits of Six Month Smiles Solutions vs. Aligner-Only Companies include:

What types of scans does Six Month Smiles accept?

We accept the following types of scans:

Who are ideal candidates for treatment? Adults WITHOUT active dental or periodontal disease who are only interested in leveling and aligning the teeth, correcting anterior crossbites, closing small spaces or maintaining space for implants, rounding out the upper and lower arches, correcting minor dental open bites, improving deep bites, and leveling the gingival margins.

Can I treat an Implant case with Six Month Smiles? Yes. However, the fewer teeth there are, there is an increase in case complexity. Complexity depends upon which teeth are missing and what are the patient’s treatment goals. We have a wide range of support options to guide you.

Can I treat single arch cases? Yes, keeping in mind some limitations of Single Arch Treatment:

What types of cases can I treat with Six Month Smiles?

Most patients with crooked or spaced teeth are candidates. A patient is not a candidate if their chief complaint cannot be fully addressed within the time period of about 6-10 months.  Think about the patients you see each day – many of them would be great candidates for simple ortho treatments to give them a confident smile and pleasing result.

How do I know if a case is too difficult? Six Month Smiles has a wide range of support options that can help you determine if the case is doable.  You can post the patient photos on our Forum and one of our mentors will advise you on whether your patient is a candidate for Six Month Smiles (most adult patients are).


The best method for more detailed evaluation, is submitting your case with CONFIDEX digital treatment planning added, in which your case will be digitally analyzed and treatment planned by a team of orthodontists.  The complexity of the case, patient’s treatment objectives and your past experience with fixed appliances are factors that influence case difficulty.

With the forum, CONFIDEX and one-one support, Six Month Smiles will support and guide you at every step of the way.

Can Six Month Smiles cause problems with TMJ? It is highly improbable that short term orthodontics will cause problems with the temporomandibular joint.

When I hear this question, I think back to the question posed by Dr. Barry Glassman:

When do the teeth occlude? “WHEN?” is when the teeth are together; one point in space within the entire envelope of function. I also realize that the “WHEN?” is independent of the shape and arrangement of the teeth. The primary concern with craniofacial pain and temporomandibular dysfunction is THAT the teeth are in contact, as opposed to HOW the teeth are in contact (or what the occlusal scheme happens to be). Temporomandibular joints are not damaged when the mandible is in rest position. They are damaged by load (bruxism), and it has been shown that altering occlusion does not increase bruxism.[10-12] There is a modifier to this, however. Although occlusal factors do not make our patients brux more, these factors can make bruxers brux differently. In his lectures, Dr. Jim Boyd often refers to the parafunctional quad; four factors that are important when evaluating a patient’s parafunction: Intensity, Duration, Frequency and Position. When evaluating the occlusion and its effects on bruxism, it seems that position and intensity ARE the most relevant because in particular mandibular positions, the contacting teeth have an effect on the intensity of bruxism.[5] For this reason interferences present a paradox. Interferences are poor indicators of temporomandibular disorders and bruxism [10-12]. However, studies such as conducted by Liu in 1998 concluded that malocclusions with interferences do have an increased risk for developing TMD.[13] Le Bell observed that subjects with a history of TMD reacted to artificial interferences more than those with no history of TMD.[14] In other words, those who brux will be worse with interferences than without, but in those that do not brux, interferences are inconsequential. The caution, it seems, should be in identifying patients with pre-existing symptoms and therefore vulnerability to temporomandibular disorder, rather than focusing on the occlusion itself. Extractions are not required in most cases, however about 5% of Six Month Smiles patients may need extraction of a lower incisor. This will be covered in detail at the Six Month Smiles course.

Is there a change in occlusion with Six Month Smiles? There can be a change of occlusion when we are trying to correct the patient’s chief cosmetic complaint. This is on a case by case basis – however generally the occlusion improves once the teeth are aligned. We don’t attempt to change the patients’ angle classification with Six Month Smiles.

Can I finish my cases with cosmetic dental work? Absolutely! Short term orthodontics is a great gateway to set up for a better looking cosmetic/restorative dentistry. Six Month Smiles allows for the ability to provide minimally invasive dentistry, preserving as much tooth structure as possible. 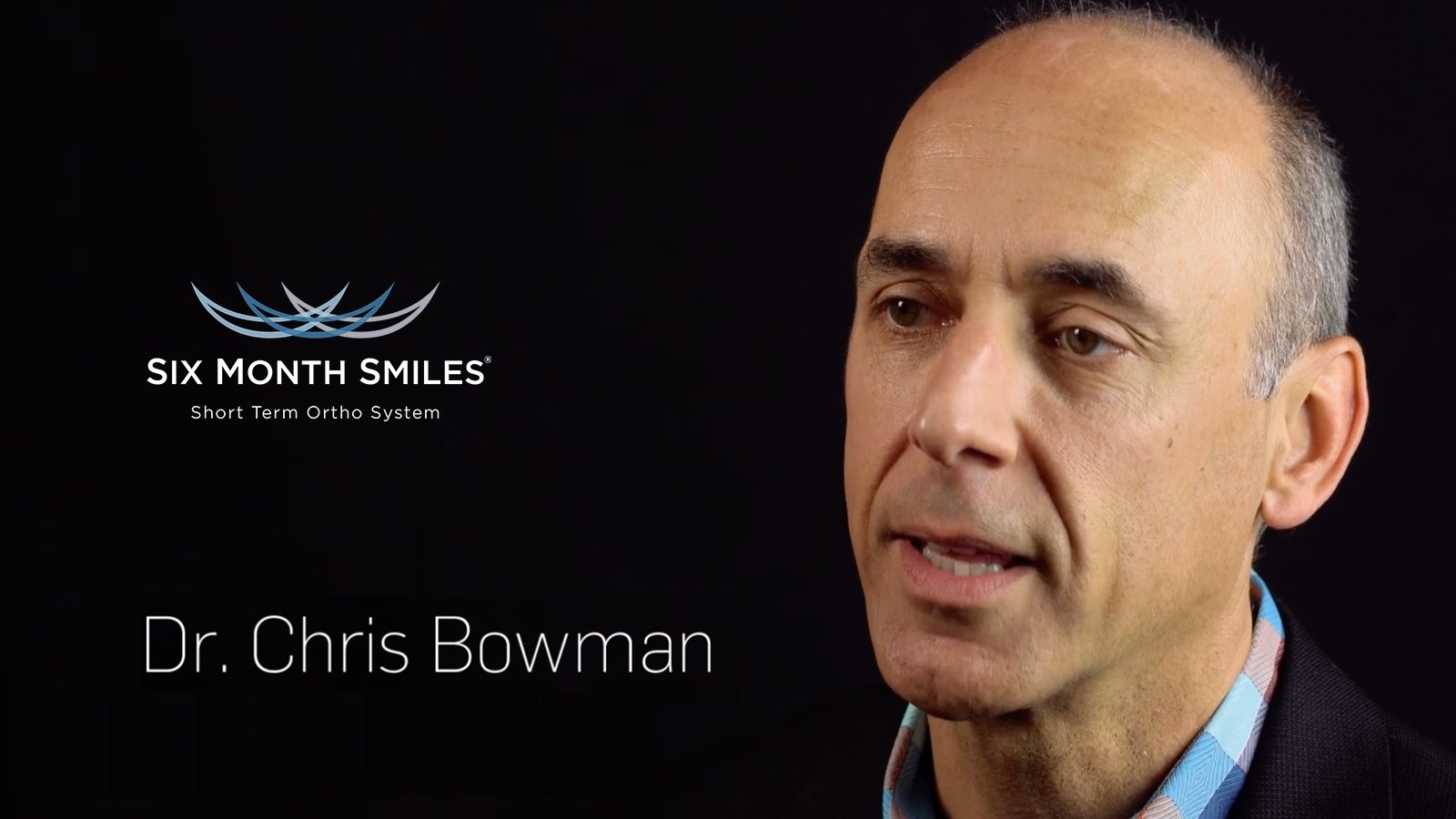 Six Month Smiles® is designated as an Approved PACE Program Provider by the Academy of General Dentistry. The formal continuing dental education programs of this program provider are accepted by the AGD for Fellowship, Mastership and membership maintenance credit. Approval does not imply acceptance by a state or provincial board of dentistry or AGD endorsement. The current term of approval extends from 8/1/2012 to 7/31/21. Provider ID: 341087

Schedule a call with a Six Month Smiles representative.